The Legacy Project was initially sponsored by the Lynchburg branch of the NAACP. It became incorporated with 501(c)(3) non-profit status in 1995. In keeping with its mission to provide educational exhibits and programs on the history and culture of African Americans in the area, the Legacy Project sponsored lectures and panel discussions and arranged exhibits of Ann van de Graaf’s painting. “Lord Plant My Feet on Higher Ground.” The painting, which now hangs in the stairwell of the museum, depicts local persons and places associated with Civil Rights events in the 1960s and 70s.

In 1997 the Legacy Project acquired a dilapidated but once beautiful house at 403 Monroe Street, Lynchburg. Architect Kelvin Moore was engaged to draw up plans to transform the 100-year-old house into a modern museum. A Capital Fundraising Committee was formed to raise $300,000, and a Collections Committee was formed to solicit and archive artifacts for the permanent collection.

In March of 1999, Gerdy Construction Co. began the huge task of reconstruction. That work was completed 15 months later. On June 25, 2000 a celebratory dedication and grand opening was held. Dr. Vivian Pinn, Director of the Office of Research on Women’s Health at the National Institutes of Health, gave the opening address. The ribbon was cut by civil rights pioneer Mrs. Drucilla Moultrie and historian Harry Ferguson, both in their 90s, and 6 year old Ashley Lewis.

The Mission of the Legacy Museum of African American History is to enrich the lives of local residents and museum visitors by fostering and stimulating an appreciation of the diversity of the African American experience in Lynchburg and surrounding counties/cities.

The Legacy Project, Inc. will achieve this mission by presenting oral history, artifacts and memorabilia through exhibitions, programs, workshops, and lectures that represent the achievements of African Americans.

2015 – 2017 - The Rhythms of Yesterday and Today: A History of African American Music in Lynchburg, Virginia and Surrounding Areas

2017 – 2019 - Visual Voices: A Celebration of African American Artists from Lynchburg and Surrounding Areas

2019 – Current - The Development of An Athlete: Framing Sports Through Race, Gender, Perseverance and Community 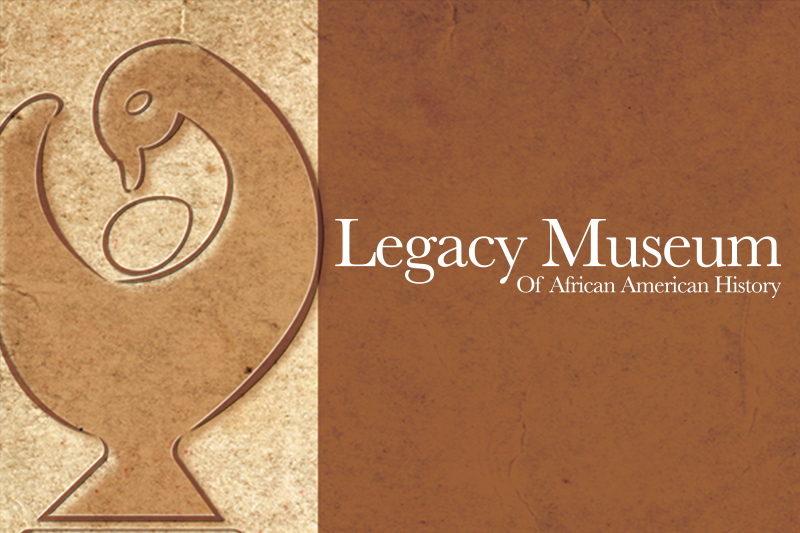 About The Legacy Museum Logo

Our logo is the sankofa.This Akan symbol means "return and take from the past that which may have been forgotten but which will be of use today and in the future." In Ghana the sankofa is stamped on textiles and carved on staffs and stools of office. It is used much as we are using it: to remind people that there is much in their past of which to be proud and much that is of value in coping with modern-day challenges.

Please Donate To Your History.